Is there Life … after Birthright? A different view of Leadership Development

Yoni Ari, Philadelphia Director of the Israeli American Council (IAC) shared with me a new announcement for the IAC Edge Conference in NYC on September 8, with 16 plus Israeli speakers over a nine-hour day-long Conference speaking to YP’s.

Don’t get me wrong. I love the Jewish Conferences, whether it is IAC, AIPAC, the GA or others. A multitude of speakers on topics of the latest developments in Israel, how Israeli Hi-Tech is making its mark, a better understanding of current issues, and with these presentations YP’s can have an extremely valuable experience.

It is just that my preference in reaching YP’s is to offer them a different method of leadership development. Rather than “full frontal” presentations, I much prefer informal educational, experiential activities. Much like YP’s on Birthright in Israel, floating on a raft going down the Jordan, more personal interactions can take place on a raft, and meaningful and lasting friendships can be built.

Imagine upon their return from Birthright, rafting down the Lehigh River in the Poconos, with other young professionals involved in the Jewish community. They would meet people like Michael Alexander, Regions Director for the Israeli Consulate in NYC, or former Philly shaliach Raul Molnar (pictured) … and perhaps spend 2 hours in a raft with Benny Davidson, the “Bar Mitzvah” hostage saved by Yoni Netanyahu’s IDF rescue team at Entebbe on July 4th 1976, America’s Bicentennial.

The discussions around the Havdalah campfire with Benny gave YP’s the chance to be up close and personal with a part of Israeli history and explore the shared Israeli narrative with America’s story. Many YP’s are not aware that Israel’s acclaimed IDF Rescue took place on America’s Bicentennial, and was led by Yoni Netanyahu, older brother of Bibi, who grew up in Elkins Park, PA.

Deepening the discussion was Benny’s friend and travel partner, Avner, who curated the Mossad exhibit on the Entebbe Rescue. Because he also curated the international Mossad exhibit on the capture of Eichmann, Avraham was the official consultant to last year’s Hollywood film sensation “Operation Finale” starring Ben Kingsley. YP’s got the chance to engage these Israelis with their own personal stories. 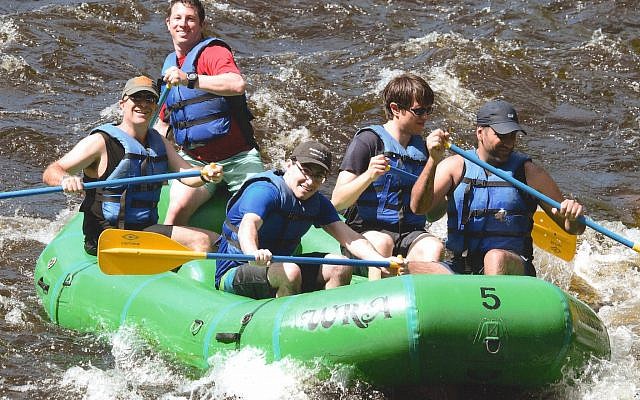 Taking place at Congregation Mikveh Israel on July 5, 2016, the previous year, YJLC brought the Israeli speakers to Philadelphia and produced the only US national commemoration of the 40th Anniversary of the Entebbe Rescue and Heroism of Yoni Netanyahu.

During the visit of the Israeli guests on July 4th at the historic Philadelphia “Synagogue of the Revolution,“ YP’s participated in a revealing discussion on Jewish identity … and the diminishing connection to Israel. The session was an eye-opener for all, both for the Israeli guests, and those who led the discussion, a few top professionals working with YP’s in the Jewish Community. Leading the discussion were Andy Borans, Executive Director of AEPi, Yossi Puder, Executive Director of Mid-Atlantic StandWithUs, Fay Goldstein, of Hasbara Fellowships, and Brandon Cohen, So. NJ JCRC Program Director.

While in the Summer the means for Leadership Development is Rafting, in the Winter the attraction for YP’s is Skiing in the Poconos. The scenic Pennsylvania get-away is as close as 90 minutes from both NY and Philly.

In February 2019, for the 30th anniversary YJLC Pocono Ski Leadership Weekend, again there were special Israeli guests. Celebrating with YP’s were Almog Elijis, the dynamic new YP Spokesperson for the NY Israeli Consulate, and her friend Shay Bialik, Economic Advisor for Israel at the UN. The primary “full frontal” talk was scheduled as a one-hour post-Havdalah discussion on Israel. It lasted more than 3 hours, with YP’s absorbed in the back-and-forth personal interaction. Immediately following, for those who did not take a late-night dip in the pool, were card games and hilarious stories late into the night. 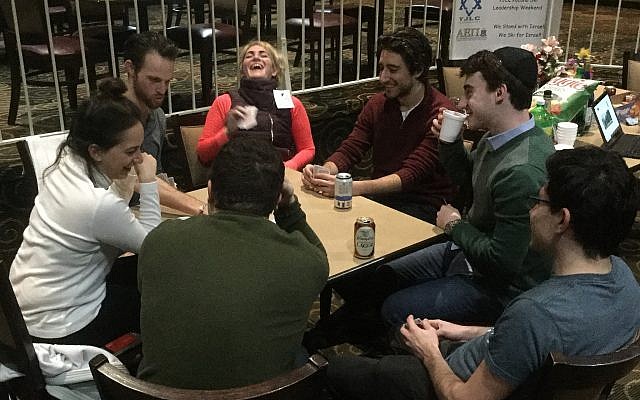 Rejoining YJLC for the 32nd Rafting Weekend on August 16-18, 2019, is Israeli columnist and StandWithUs Director Yossi Puder, with organizers Ben Goodstein, YP leadership training and travel consultant, and this writer. Goodstein will explore identifying concepts and measures of leadership, while I will share insights on “the Power of One, and the Power of Community.”

Birthright has been the shot-in-the-arm of Jewish engagement for YP’s. The past twenty years it has also become the saving grace for the Jewish community. The question remains though, what happens when they come back? Part of the answer is a program like YJLC’s Leadership Development enterprise, where leadership traits and friendships develop on a hot Summer weekend on a raft floating down the scenic Lehigh River… with a few rapids along the way.

Lou Balcher served from 2004 – 2013 as Director of Academic Affairs to Consulate General of Israel to the Mid-Atlantic Region. He also served as Education Director for Congregation Tifereth Israel in Bensalem, PA, and as administrator and teacher for Gratz College’s Jewish Community High School. He is a former Membership Director for the Philadelphia and Cincinnati regions of B’nai B’rith International. For three decades, he has coordinated post-college young leadership programs for Young Jewish Leadership Concepts. Additionally, he consults as National Director of the American Friends of the Kaplan Medical Center, Rehovot, Israel which serves more than one million Israeli citizens.

This article was initially published here on Times of Israel.