Israeli Muslim, Christian, and Jewish educators participating in ‘The Teachers’ Room’ at HUC-JIR.

“Teachers in Jerusalem are on the front lines,” explains Dr. Michal Muszkat-Barkan, Director of HUC-JIR’s Department of Education and Professional Development at the Taube Family Campus in Jerusalem. “Every day in their classrooms, these educators who are Jews and Arabs, Christians and Muslims, religious and secular, have to face the fear of the ‘other,’ the stereotypes, and sometimes the hatred. In ‘The Teachers’ Room,’ we create opportunities for teachers to discuss their own fears and aspirations and to create shared pedagogies for tolerance and pluralism.”

This new summer training program is supported by the American Center, a project of the U.S. Embassy in Israel, and the family of 16-year-old Shira Banki, who was tragically murdered at the Jerusalem Pride Parade in 2015. 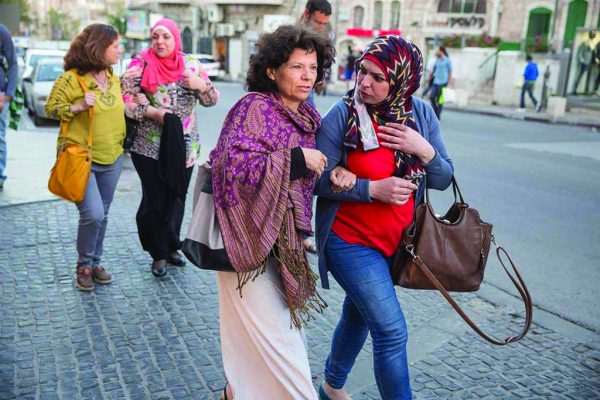 “I want to salute HUC-JIR for this partnership,” states U.S. Ambassador Daniel B. Shapiro. “We are working together to promote co-existence and a shared society and are proud to be working with this institution, and with the Banki family, to further Shira’s legacy in impactful and meaningful ways.”

During the eight-session program, sixteen teachers got to know one another, gained an understanding of each other’s communities and neighborhoods, and developed the pedagogic tools to bring their encounters into their classrooms. As they drew a map of “their” Jerusalem, shared narratives, and studied key texts together, they enriched each other’s perspectives. Some of these teachers will go on to become facilitators to more groups of teachers to ensure a growing number of educators and schools that will change the conversation about Jerusalem. The Jerusalem Municipality Department of Education, Israel’s largest educational department, supports this program, offering teacher enrichment credits that benefit the teachers and serve as a powerful incentive to join the program. In addition, the program receives support from the Jerusalem Foundation and the New Israel Foundation.

‘The Teachers’ Room’ is part of the city-wide ‘This Is Jerusalem’ initiative, now in its second year, which is organized by a variety of cultural, educational, and social action organizations that share responsibility for shaping the multi-faceted, pluralistic, and tolerant character of Jerusalem.

This article was originally published in the HUC-JIR Chronicle; reprinted with permission.