Mitjabrim Le-Chinuch: A model of collaboration between day schools in Uruguay

Mitjabrim Chinuch is a program that aims at training the next generation of teachers in Jewish Education in Uruguay as well as providing professional development to the current morim of educational institutions and strengthening the bonds between school and family. Sponsored by the Pincus Fund, the program is developed by a professional team from two Jewish schools in Montevideo (Uruguay): Escuela Integral and Yavne. This joint project provides an enriching environment where both institutions need to work together sharing every single step from planning to realization.

The Oriental Republic of Uruguay is a country in South America bordering Brazil and Argentina with a population of 3.3 million. The capital is Montevideo, Uruguay’s most populous city with 1.3 million inhabitants.

The Uruguayan Jewish community is considered among the most Zionist in the world which is reflected in the number of citizens who, in proportion to the population of Jews in Uruguay make Aliyah.

In Montevideo there are two Zionist Jewish schools nowadays. One is the Integral School founded in 1962 by a group of parents, second generation of Jews in Uruguay, with the intention of building a Jewish school with high standards regarding not only national education but also Judaism and Zionism. The school started with 53 students and now has about 1,000 students whose ages range from 1 in kindergarten up to 18 in high school. The educational philosophy of Escuela Integral rests on the pillars of humanism and pluralism with Israel occupying a central place in the institution. Studies in Judaism, Hebrew and Zionism are the basis of the educational proposal of the school.

The second institution, Yavne, was founded in 1952 by immigrants from Europe. At first it was created as a complementary school offering in its proposal Zionist Jewish studies. In 1964, in order to meet the needs of the Yishuv, the school became full-time offering courses from kindergarten to high school. Today this institution has 350 students. Since1990, Yavne has been offering other community services such as synagogue, beit midrash, kosher kitchen, sale of Jewish products as well as running programs of conversion to Judaism.

Both Escuela Integral and Yavne offer their students varied and different educational visions; however, they share a concern for the future of Jewish education in Uruguay. For this reason, both schools considered it important to get together and share a common space of preparation and enrichment for their teachers. The concern arises from the growing number of students who attend schools outside the Jewish network, a phenomenon that impacts assimilation. We believe that our schools should collaborate and contribute to connecting our students to their Jewish roots.

Escuela Integral ran a successful pilot program promoting the Seminar Lehajsharat Morim (teacher training seminary) where students studied subjects such as Ivrit, Tradition, Judaism and Tzionut. These students are the continuity of the Community and will be the future teachers in our school. This program is now continued by Escuela Integral and expanded to include Yavne School in the Mitjabrim Lejinuj program. The 3-year course includes lectures and workshops inside and outside school (Universidad ORT Uruguay, with Mofet online courses) given by local speakers as well as lectures invited from Israel and other countries.

Additionally, Yavne ran a very successful Teachers’ Development pilot program which was very popular among its participants. Its aim was not only to update contents but also to strengthen the institution’s teaching team. 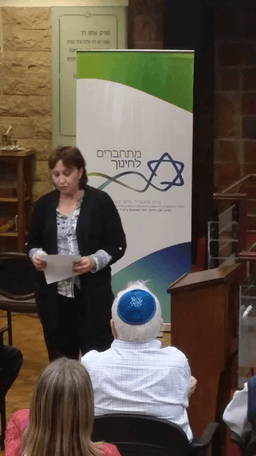 Today, as part of Mitjabrim Lejinuj in-service training for teachers of both schools takes places with local speakers, Israeli shlichim and guest speakers from Israel and other countries. These courses prove to be extremely beneficial for participants who adapt and incorporate what they learn, making their lessons richer. There is, additionally, a distance-learning platform providing not only a great source of resources on Israel and Judaism but also enabling teachers to use many of its contents in class with their students, making lessons more interactive and updated. A web page with updated material is currently being made.

The mission of Lejinuj Mitjabrim is to strengthen the Jewish identity of children and young Jews in Uruguay and to strengthen the relationship between Jewish schools with their students and their families. For this reason, the challenges in this program are to:

– Increase the number of Jewish students at schools in the network.

– Recruit and prepare a new generation of teachers for Judaism, Hebrew and Zionism

– Improve education on issues related to Israel and Judaism.

– Strengthen teaching resources between the two schools and in each of them.

– Increase the amount and variety of activities for students and families outside the hours of formal studies.

Both schools consider it of utmost importance to increase the commitment and sense of belonging of their teaching staff, developing the idea that the school is not just a workplace but one where we have a mission to fulfil. In the light of this, an array of activities are organised to make this bond even stronger: Shabatonim, evenings of songs, Israeli evenings, among others. These include not only the staff but students and their families as well, since our schools are open to the community and thrive in it.

In some cases there is a gap between the Judeo-Zionist education taught in schools and what is lived in households which makes it even more important to involve parents not only socially but academically. Therefore, Hebrew lessons are taught for adults and regular lectures are held by Rabbis, guests from abroad, specialists on Education, psychologists, etc.

Mitjabrim Lejinuj is the driving force leading to achieve the goals set by the two schools, Integral and Yavne. By working together across ideological divides the program operating in each school is now of benefit to the other, and the project as a whole maximizes the chances of increasing overall student enrollment at both schools.