Ross’s character in The Abraham Play is on the search for a property deed, but finds lessons on heritage and character and sacrifice instead.

Minneapolis, Jan. 19, 2016: For ten nights last month, Twin Cities residents got a glimpse of themselves through the prism of a fictional, hyperkinetic businessman reaching for redemption.

The Abraham Play, a one-man work by Jon Adam Ross, ended a nearly two-week run in Minneapolis and St. Paul much as it started – with audiences deeply engaged in a nearly one-hour tale of a man silenced by the weight of his heritage and the biblical parallels of his own evolution.

This was a 21st century take on Abraham and the first theatrical presentation of The InHEIRitance Project – an initiative exploring modern interpretations on Judaism’s patriarchs and matriarchs.

The Project, created by Ross with a grant from The Covenant Foundation, is exploring five such characters in original productions in five cities through 2017.

The play featured Ross, an accomplished New York-based actor, in the self-written role of an over-the-top, Blue Tooth-connected executive whose father recently died. On a frenetic mission to find an ever-elusive deed to inherited property, Ross’s character goes from greedy, selfish and philandering to one accepting lessons of sacrifice and perspective that his father sought to impart. 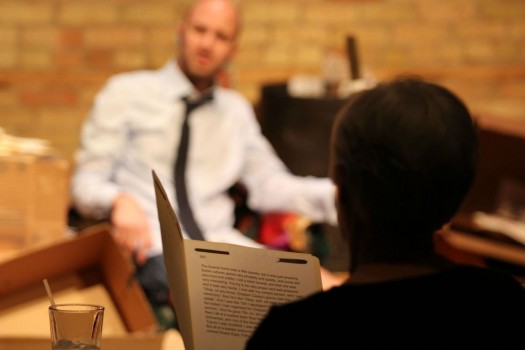 At points in The Abraham Play, and as a device to move the plot forward, audience members read short narratives about Jewish identity and history culled from Twin Cities residents.

This production was not created in a vacuum. Ross and director Chantal Pavageaux spent a good portion of the last year in the Twin Cities holding study sessions with rabbis and Biblical scholars, conversations with hundreds of members of the Jewish community and teach-ins at schools and synagogues – all an effort to reveal a local take on the character and lessons of the Bible’s premier patriarch.

“This was an interview-based show, rooted in conversations within the Twin Cities community as I sought to get perspectives and experiences based on Abraham’s narrative from the Bible,” Ross said. “I took those and turned them into a play. The DNA of this community is woven through this production by design, and fuels it with a very singular and compelling strength.”

For sure, an element of Ross’s play are some of hundreds of personal narratives of Jewish identity and history culled from community members along the way.

These short, potent tales, read by members of the audience during the performance, serve as clues in the hunt for the deed in a paper-strewn, out-of-whack office set. But they also offer glimpses into often crushing tales and morsels of wisdom that drive the character to a less cluttered place both physically and spiritually.

A reviewer in Talkin’ Broadway described the play as “fascinating in concept,” going on to say “it does not stage the story of Abraham straight from Genesis, but takes themes and values identified through the community work and places those in a contemporary context to which today’s audiences can identify.”

Ross and Pavageaux often say that the guiding principle of the InHEIRitance Project is “process as product.” The play, in other words, is the culmination of the community input that created it, but no more or less valuable.

“Most people, when they engage with art, it’s at the product stage,” Ross said after one performance. “But when people participate in the making of the art, they own it.”

So it was that those involved along the way felt a part of it. Those interviewed said the play and its themes would spur deeper examination.

“This is moving, searching and provocative, and like any piece of art can generate even deeper conversation with our friends, families and communities,” said Tuvia Abramson, a member of the Minneapolis Artists Lab, a group creating Jewish-themed art in the Twin Cities.

Toward that end, Ross and Pavageaux built in after-performance talkbacks with rabbis, academics and arts professionals, among others, to fuel analysis and interpretation and serve as bridges for continued dialogue.

“The audience was pensive and deeply engaged,” said David Harris, Executive Director of Rimon: The Minnesota Jewish Arts Council, who attended numerous performances and was a talkback panelist. “A soul – their soul too – was on trial. They followed the surprising bends in the tale as if they were lead detective in an urban whodunnit.

“Each night I saw the show I noticed how affected the audience had been by the play’s disarming conclusion. Teens, hipsters, rabbis, and bubbies were equally absorbed in the messiness and urgency of the character’s story, of Abraham’s story, of each of our stories.” 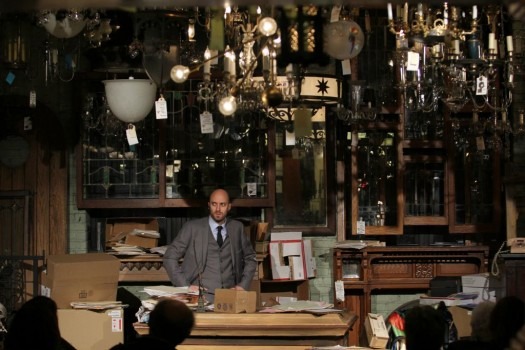 The natural decor of Architectural Antiques in Minneapolis provides a powerful set backdrop for The Abraham Play.

During its Twin Cities run, The Abraham Play appeared at the Bedlam Theatre in St. Paul and at Architectural Antiques, an antiques store transformed into a theater space in Minneapolis. A special performance for 7th and 8th grade students took place at the Amos and Celia Heilicher Minneapolis Jewish Day School.

“This process deepens my enthusiasm for what’s next: deeper dives into the themes evoked in the narratives of the book of Genesis, with communities all over the country,” Ross said. “I really can’t wait!”

The InHEIRitance Project lands next in Charleston, SC, where Ross will examine the biblical matriarch Rebekah in a performance in the spring. Additional cities include Austin, TX; Kansas City, MO; and Seattle.